Union Minister for MSME Shri Kalraj Mishra inaugurated GUJARAT KHADI UTSAV”, Exhibition of Khadi products from Gujarat under Prime Minister Employment Generation Programme, the Union minister said that such programmes should be organized in other states also as they encourage local art and culture. Appreciating efforts of Khadi Bhavan he stated that KVIC has become a center of cultural unity of the country. The Minister further added that this will bring in more sustainability and viability to the Khadi institutions and micro enterprises working across the country. He also said that there has been positive change in the minds of youth after organizing Khadi Utsavs in Universities and colleges. 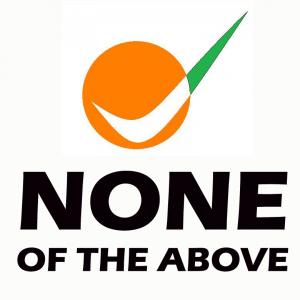 It may be recalled that the Election Commission of India had introduced ‘NOTA’ – ‘None of the Above’ option on ballot papers displayed on EVMs and all other ballot papers with effect from 11th October, 2013, pursuant to Supreme Court’s Order dated 27th September, 2013.

The Election Commission of India has now introduced a specific symbol, like other election symbols, shown below, for ‘None of the Above (NOTA)’ option, to facilitate the voters in exercising their NOTA option.  This symbol will now appear in the last panel on all EVMs and the others ballot papers against the ‘None of the Above (NOTA)’ option at all elections to be held from now onwards.  The necessary instructions have been issued to all the Chief Electoral Officers in this regard.The main objective of the ‘NOTA’ option is to enable electors who do not wish to vote for any of the candidates to exercise their right not to vote for any candidate without violation of the secrecy of their decision.

The symbol for ‘None of the Above (NOTA)’ option has been designed by National Institute of Design (NID) Ahmedabad.

Minister of Railways has made a statement in the Budget Speech 2015 that Indian Railways shall fit Vacuum toilets on trains. Development Cell of the Railway Board has come up with a design that combines the advantages of Vacuum toilets and those of Biotoilets to create a new design of “Hybrid Vacuum Toilet”. A prototype has been made by modifying the standard flushing protocol of a vacuum toilet so as to create water seal and additional post flush cycles and this concept has been converted into a working prototype by Indian Railways as a first ever system of its kind to have been developed and built by any railway system in the world. This newly developed toilet has been fitted in one coach No. 153002/C FAC that is running in Dibrugarh Rajdhani for trail.

The prototype consists of a custom designed Vacuum toilet adapted from a commercially available vacuum toilet that is used in aircrafts which evacuates its discharge into a biodigester tank which is now successfully proven in the biotoilets of Indian Railways. The biodigester tank is fitted underneath the coach and contains anaerobic bacteria that converts human fecal matter into water and small amount of gases before discharging the same on the ground/track.

ICICI bank CEO Chanda Kochhar is among three Indians selected for this year's Asia Game Changer awards given by Asia Society to honour "true leaders making a positive contribution to the future of Asia."Indian-American actor Aasif Mandvi, 49, and designer Kiran Bir Sethi, 49, also made it to the list besides Kochhar, 53.

Champion Boxer and Philanthropist from the Philippines Manny Pacquiao is the 2015 Asia Game Changer of the Year "for using his sport and his star power as forces for good," Asia Soceity, the leading global cultural organisation, announced.

The honorees will be bestowed the honour at the Asia Game Changer Awards dinner and celebration at the UN in October.The New York-based organisation said Ms Kochhar "not only made history" by becoming the first woman to head an Indian bank but she also transformed the entire Indian retail banking industry.

Mr Mandvi has become a powerful spokesperson for Muslims and Asian-Americans. Mumbai-born Mandvi has "challenged stereotypes" and provided a voice for Muslim-Americans, changing the game in terms of how Asians are viewed on TV.In 2015, he co-wrote, produced and acted in the web series 'Halal in the Family' for the popular comedy site Funny or Die, using the sitcom format to tackle Islamophobia.

The Asia Game Changer Awards, launched by the Asia Society in 2014, are designed to fill a vital gap, identifying and honoring true leaders making a positive contribution to the future of Asia. These awards are bestowed annually to individuals, organizations, and movements that have inspired, enlightened, and shown true leadership in areas that reflect Asia Society’s core pillars of policy and business, arts and culture, and education.Asia Society is thrilled to honor these people and their achievements, and to share their triumphs with the rest of the world, as they are each living representatives of the Asia Society mission: to promote mutual understanding and strengthen partnerships among peoples, leaders, and institutions of Asia, the United States, and the world. We invite you to join us in creating the atmosphere and conditions for future Asia Game Changers to develop and thrive.

India and the US have created a "joint challenge coin" to symbolise their unique partnership in creating a next-generation aircraft carrier for the Indian Navy.One side of the coin reads "Forward Together We Go" and "Chale Chale Saath Saath" in Hindi; which is the vision statement of US President Barack Obama Prime Minister Narendra Modi, issued in their first meeting at the White House last September.The other side of this coin, which is golden in colour, has the maps of India and the United States and an aircraft carrier floating on blue water.The "joint challenge coin" was created by the joint working group at their first meeting in US last month "to symbolise partnership", Keith Webster, Director and International Cooperation Office of the Under Secretary of Defence for Acquisition, Technology and Logistics.

During Obama's visit to India in January, the two countries had announced the establishment of a working group for a next-generation aircraft carrier to bolster the Indian Navy's blue-water capabilities, which held its first-ever meeting in Washington last month.

Despite a strong pitch on 'Make in India' initiative, India has fallen 5 spots in the global innovation index to 81 rank. Published by Cornell University, INSEAD France, and World Intellectual Property Organization, with CII as the knowledge partner, the study was done on 141 economies across the world on their innovation capacity and efficiency. The ranking is based on data, ranks and strengths and weaknesses on 81 indicators India is ranked below all other BRICS nation, which are the main competitors when it comes to attracting investments into the country. Brazil, Russia, China and South Africa are ranked at 70, 48, 29 and 60 positions respectively.

India was ranked at 76 position in the last year's report and at 66 in 2013 which shows that innovation levels in India have been falling consistently. "We applaud the new innovation policies put in place by the new Indian government, which are not yet effectively captured by the data used in the GII," said Chandrajit Banerjee, Director General of Confederation of Indian Industry (CII). "Some of these measures have already had a positive impact on the build-up of innovation momentum and entrepreneurial mood in the country, and we expect this trend to grow in the coming months and years." Switzerland, the United Kingdom, Sweden, the Netherlands and the United States of America are the world's five most innovative nations, according to the Global Innovation Index 2015.

The GII 2015 looks at "Effective Innovation Policies for Development" and shows new ways that emerging-economy policymakers can boost innovation and spur growth by building on local strengths and ensuring the development of a sound national innovation environment. 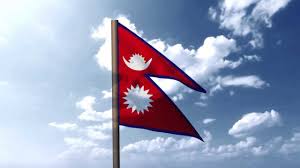 Nepal finally has a formal constitution after nearly a decade of political paralysis.The landlocked Himalayan nation’s parliament passed the constitution on Wednesday with 507 out of 601 members of its Constituent Assembly voting in favor, Presse reported.The new charter replaces an interim constitution that has governed the country since 2007, when a decade long civil war culminated in the end of its Hindu monarchy. Since then, rival political parties have been at loggerheads over the document’s details, a disagreement that dragged on for years until this year’s devastating earthquake that claimed nearly 9,000 lives prompted a hasty reconciliation. The constitutional logjam was widely blamed for the delay in mobilizing rescue efforts, prompting the country’s three leading political stakeholders — the formerly anti government Maoists, the main communist party UML and the Nepali Congress — to begin the drafting process in June.The constitution has not been without controversy, however, with the decision to divide the country into seven distinct provinces sparking protests that claimed at least 40 lives in recent weeks. Critics of the bill say the divisions will further marginalize Nepal’s ethnic minorities like the Tharu and Madhesi communities. A clause that increases barriers to Nepali children automatically acquiring their mothers’ citizenship has also been criticized as backward.“Ownership of the document is important,” Lok Raj Baral, executive chairman of the Nepal Centre for Contemporary Studies, told AFP. “Even if it is a minority that does not accept it, the parties have to take an initiative to address the disgruntled elements.”The general reaction, however, has been one of relief and positivity, with loud cheers reportedly breaking out in the assembly when Speaker Subash Nembang announced the passage of the bill.It is an issue of pride for all Nepalis that the people’s constitution has been passed from the Constituent Assembly,” Nepal’s Prime Minister Sushil Koirala tweeted.Koirala has announced that he will step down once the constitution is in place, paving the way for a new government to take over.

Shotputter Manpreet Kaur smashed an 18-year-old national record to win gold and qualify for next year's Olympics as Railways dominated the show on the opening day of the 55th National Open Athletics Championships here on Wednesday.The 25-year-old Railways girl, who had the previous best of 16.39 at last year's Delhi National Open, threw the iron ball to 17.96m in her second attempt to shatter Harbans Kaur's earlier national record of 17.43m that stood since 1997.This was Manpreet's hat-trick of gold medals at the National Open and sixth overall as she also got past the Olympics qualification mark of 17.80m.Ace long distance runner OP Jaisha, also from Railways, who has already booked an Olympic berth in marathon, set a meet record in the 5000m in the very first event of the day.Jaisha clocked 15:31.73 to better Preeja Sreedharan's eight-year old meet record of 15:45.96 as Railways made a clean sweep in the women's 5000m.Sarita Singh bagged Railways the third gold of the day when she threw 58.97m in the hammer throw, while Sonam of LIC and Gunjan Singh of Railways bagged silver and bronze respectively.

Veteran Test cricket left-hander Shiv Chanderpaul has been honoured with the Icon Award by the Indo-Caribbean Alliance.In a ceremony held in New York recently, the 41-year-old was given the New York City-based organisation’s highest award and was one of four persons honoured in a five-hour-long ceremony in Flushing, reports CMC.The others receiving awards were television personality Lakshmee Singh, New York City council member Eric Ulrich and businessman Dave Kadernauth.Chanderpaul said he was delighted to have been chosen for the honour.“I’m happy to support the Indo-Caribbean Alliance, and humbled to receive their highest award, the Icon Award,” Chanderpaul said on Wednesday.“We want to see this organisation succeed in providing programmes for residents in New York City.”Chanderpaul has been one of the most prolific run-scorers in West Indies cricket, amassing 11,867 runs from 164 Tests at an average of 51. He is only second to Brian Lara in aggregate.However, he was sacked in May for poor form ahead of the Australia series and was also recently overlooked for the tour of Sri Lanka beginning next month.