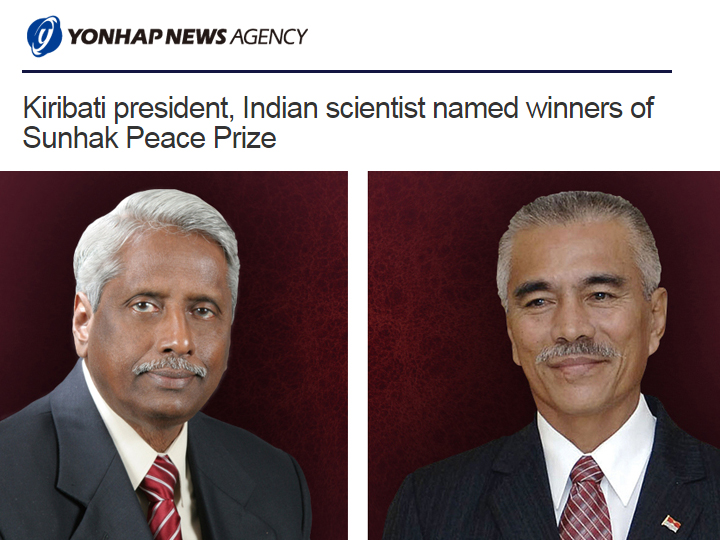 The first Sunhak Peace Prize 2015 was awarded to award to Kiribati President Anote Tong and fisheries scientist Dr. M. Vijay Gupta on August 28, 2015. This award is given to eminent individuals from around the world for their contribution to peace and development of the world.Indian agriculture scientist Dr Modadugu Vijay Gupta, has done pioneering work in aquaculture in India, Bangladesh and several Southeast Asian countries.
He has been selected for this award for his pioneering work in the blue revolution. He has invested his entire life to developing sustainable aquaculture as an alternative solution to the future food crisis.Tong, 63, the head of the Pacific Ocean island nation which is facing dire prospects of being engulfed by rising sea waters by 2050, was chosen for the award for his dogged fight to end the carbon emissions which are spelling doom for small island nations.The winners, who were announced at the National Press Club in Washington, D.C., on June 8, 2015, will share the $1 million international peace prize.

Dr. Modadugu Vijay Gupta born on 17 August 1939 is an Indian biologist and fisheries scientist.He is considered a pioneer in the blue revolution of Southeast Asia.He was awarded the World Food Prize in 2005, for development and dissemination of low-cost techniques for freshwater fish farming by the rural poor.Gupta hails from Bapatla in the State of Andhra Pradesh, India.Till his recent retirement, Dr. Gupta served as the Assistant Director General at World Fish, an international fisheries research institute under the Consultative Group on International Agricultural Research (CGIAR) based at Penang in Malaysia.

About Sunhak Peace prize --The Sunhak Peace Prize was established at the proposal of Dr. Hak Ja Han Moon who wished to honor and inherit the peace ideology and will of her late husband, the Reverend Sun Myung Moon, who dedicated his life to a movement that transcends race, religion, and nation for the realization of his One Global Family peace ideology.The Sunhak Peace Prize pursues the three key banners of ‘respect for human rights’, ‘conflict reconciliation’, and ‘ecological conservation’.The laureate is awarded with a certificate, a medal, and US 1 million dollars.