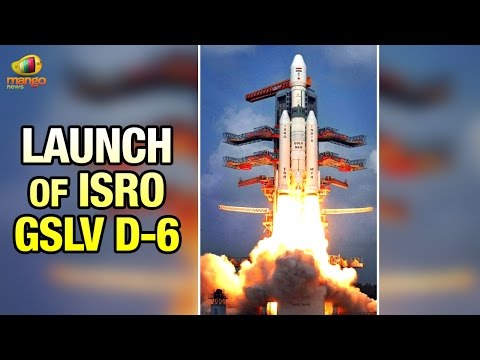 In its ninth flight (GSLV-D6), India's Geosynchronous Satellite Launch Vehicle, equipped with the indigenous Cryogenic Upper Stage (CUS), successfully launched GSAT-6, the country's latest communication satellite, into a Geosynchronous Transfer Orbit (GTO). The achieved orbit is very close to the intended one. The launch took place from the Second Launch Pad at the Satish Dhawan Space Centre SHAR (SDSC SHAR), Sriharikota, the spaceport of India. This was the fifth developmental flight of GSLV and the third to carry the indigenous CUS. GSLV-D6 was intended to further test and qualify the CUS developed by ISRO. In its oval shaped GTO, the GSAT-6 satellite is now orbiting the Earth with a perigee (nearest point to Earth) of 168 km and an apogee (farthest point to Earth) of 35,939 km with an orbital inclination of 20.01 deg with respect to the equator.

After a smooth 29 hour countdown, the 416 tonne, 49 m tall GSLV-D6 carrying the 2117 kg GSAT-6, lifted off at 16:52 Hrs IST. About seventeen minutes after lift-off, GSAT-6 was successfully placed in GTO. At 4.8 seconds before the countdown reached zero, the four liquid propellant strap-on stages of GSLV-D6, each carrying 42 tonne of liquid propellants, were ignited. At count zero and after confirming the normal performance of all the four strap-on motors, the mammoth 139 tonne solid propellant first stage core motor was ignited and GSLV lifted off. The major phases of the flight included the core motor burn-out, strap on burn-out, ignition of the second stage, separation of the core motor together with strap-ons, payload fairing separation, second stage separation, CUS ignition and its timely shut down after satisfactory performance. Following this, GSAT-6 separated from CUS about 17 minutes after launch.